Last month, Captain Marvel became the latest Marvel Cinematic Universe (MCU) craze to hit theatres. The movie has generated a lot of buzz with the release of Avengers: Endgame just around the corner. Not to mention becoming the MCU’s first female-led installment, following in the footsteps of DC’s Wonder Woman in 2017.

The film has been a success, earning over 350 million dollars at the domestic box office in the first 3 weeks, and ranking as the number one movie of 2019 so far. However, the release still posed some level of uncertainty for Marvel Studios and its shareholder Disney. While Wonder Woman went on to unexpected successes, there have been relatively few big-budget female-led superhero films, since superhero fandoms generally skew towards males. Multiple reports also suggested that unhappy MCU fans had been bombarding the movie with negative Rotten Tomatoes’ reviews to try to bring its approval score down.

So what was TV advertising’s role in getting fans and cinemagoers into the theatre for Captain Marvel? 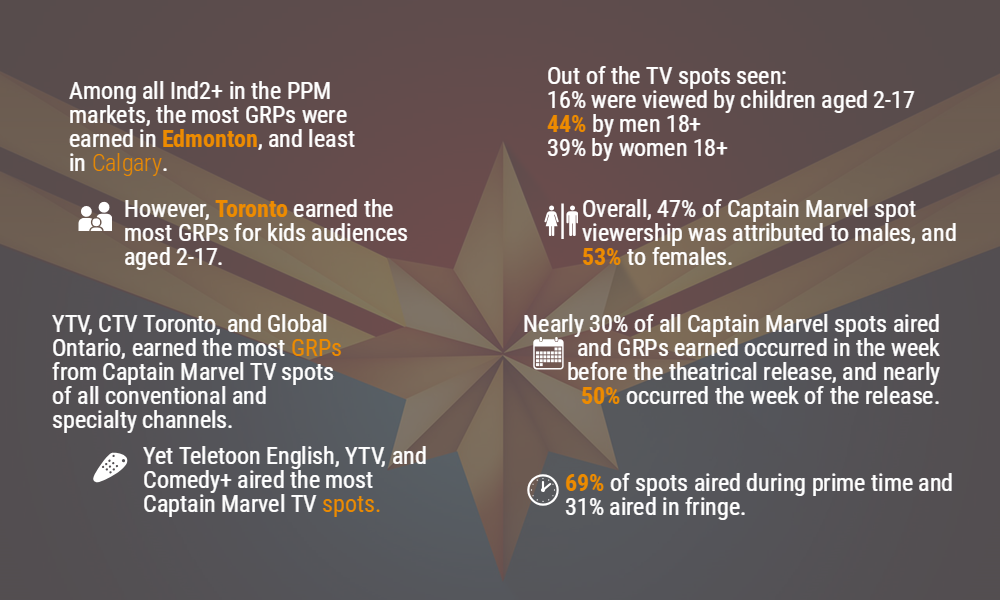 By comparison, commercial GRPs earned for the popular Valentine’s Day romantic comedy Isn’t It Romantic were 63% skewed towards women.

There appeared to be several strategies at play for the TV ad campaign.

We predict similar strategies to emerge closer to the release of Avengers: Endgame. Stay tuned to find out

Helping our clients win with RADTracker

We've all heard how important it is to focus on brand building during COVID-19. Experts across the globe have shown us historical data supporting the fact that brands that invest during difficult times are more successful in the end. ThinkTV and RadioConnects have done an amazing job at curating [...]
END_OF_DOCUMENT_TOKEN_TO_BE_REPLACED

Unsurprisingly TV viewing in Canada has been impacted by the COVID-19 pandemic.  At the beginning of the initial lock down it grew for a number of reasons. A need for news updates on the pandemic along with increased availability to view with more people at home meant that average hours viewed per [...]
END_OF_DOCUMENT_TOKEN_TO_BE_REPLACED

We create our hot topic audience report at the end of every TV season so that our clients have quick and easy access to the TV viewing trends in Canada.
END_OF_DOCUMENT_TOKEN_TO_BE_REPLACED