We create our hot topic audience report at the end of every TV season so that our clients have quick and easy access to the TV viewing trends in Canada.

The seasonality of TV viewing plays a critical role in programming and media planning and buying. In particular, fall remains a key period for the TV industry, as this is when many new and returning shows start. How well the shows perform during this time period determines whether they’ll return in the spring. And the spring is equally important as this is generally the time of major sports playoffs, awards shows and season finales.

What our report covers

Clients with a TV PPM subscription can access this report either through the Lens platform or from the homepage of InfoSys+TV PPM. 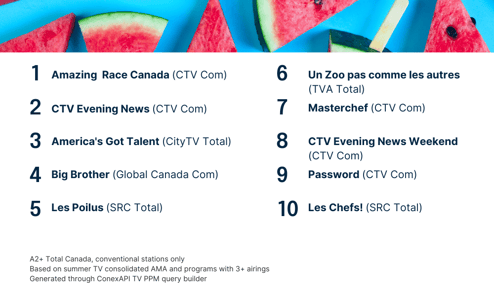 This report is created using Conex. This tool accesses Numeris TV PPM data directly and feeds it seamlessly into data visualization tools, such as Excel or Microsoft PowerBI. This allows you to spend far less time creating reports and more time finding the insights you need and acting on them.